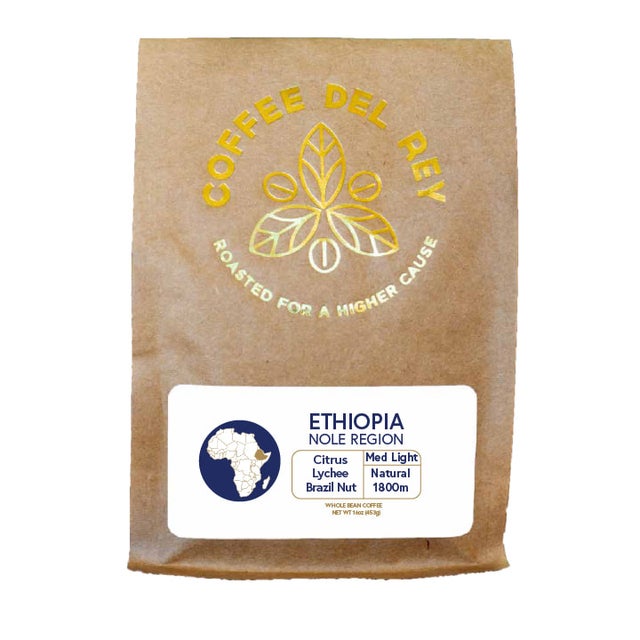 The Nole Coffee Farm is located in Nole Kaba is one of the woredas in the southwest part of Oromia of Ethiopia. Part of the West Welega Zone,

Coffee is said to have originated in this region making it a key part of the cultural and ancestral heritage of the natives, frequently used in ceremonial processions and prized for it's medicinal properties. The plants are shade grown in the forests of the Bube Mountain, bordered by several rivers including the Metu Ghimbi providing diversified nutrients and some of the richest soil in Ethiopia.

The coffee from Nole is absolutely delightful, but producing this prized crop is not without it's challenges! It is one of the oldest, yet under represented coffee producing regions in Ethiopia. Few have discovered the wonders of their coffee due to several factors that have affected their ability to produce coffee in the area. There are more than 2500 coffee farms clustered around the Nole region and the coffee is harvested by hand, but there is a major labor shortage during harvest and most of the farmers do not have high quality storage for the cherry. This, coupled with the absence of investment in infra structure and agricultural technology, has resulted in low yield.

Agriculture production creates a complicated supply chain among different ethnic groups, but during harvest season, seasonal workers from different parts of the country join the local labor force to produce coffee along with other types of agricultural products making coffee a cash crop.

These farmers and their families inherit many centuries old knowledge that keep the environment from major degradation. Farmers use only natural fertilizers and coffee trees are planted in the forest or under large native trees protecting the land from desertification and soil erosions.

The coffee we present to you is a natural dried processed coffee that has been a true labor of love.

This Natural process coffee is a citrusy-sweet, berry fragrant coffee with bright tasting notes of citrus, Lychee, and a nutty finish.

We recommend brewing on your favorite method between 205-207 degrees.